Read, Argus from Jilliane Hoffman. So what should I say? The first two books where extremely thrilling and this one is not one bit less exciting. Bad thing is that there are no more sequals to read. Damn. 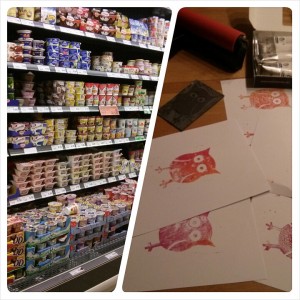 Seen, GNTM. But until now there were no shootings I really liked. The balloons were nice but I am really looking forward to see the shooting with Kristian Schuller.

Crafted, only little this week. But tried something new at least. Linoleum printing. It is definately fun doing this. For a first test I tried an owl. And the outcome can actually be recognized as an owl X-D. Will do this again and see what comes next 😀

Refrained, at least tried it :o). The Bund für Umwelt und Naturschutz Deutschland has called for #Plastikfasten and we are trying to do so. But unfortunately plastic is so common in our everyday life, so this is no easy task. You realize that once you actually try to reduce plastic and walk through stores with open eyes. But that’s no reason to give up, right? 🙂

Have a nice sunday!