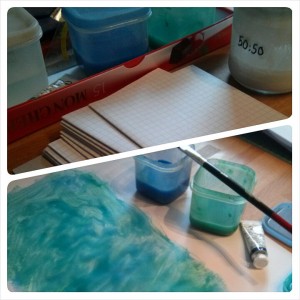 Crafted, a lot this week.
I have some nice ideas for some books lately and I feel like realizing them all at once. At least I started all at once and i hope to finish them also x-D. With the foto you get a tiny sneak peek on what i’m doing right now 🙂

Played, with my video camera – and the thought of showing a video here soon.

Read, Retribution, by Jilliane Hoffman. A Thriller. And so thrilling you just can’t put it aside. “One rainy night in New York City, outstanding law student Chloe Larson wakes from a terrible nightmare. But it’s not a nightmare – it’s real. Not only is she savagely violated in her own bedroom, Chloe then has to deal with the horror of nobody being brought to justice.”

Donated, blood. I’m out of order for the rest of that day, but the feeling to have done something meaningful is worth the effort. It’s even more intense when there is a sticker on the donation claiming ’emergency reserve’. 🙂

Run, and that wasn’t an easy task this weak. Anyway, did it four times this weak and a total of 34 km :-D. Goal for next week: another 34 km and a tempo run on thursday.

And now I wish everybody a nice sunday! 🙂